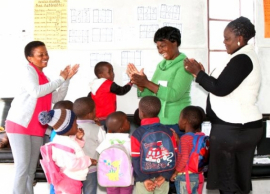 As South Africa joins the rest of the African continent and the world in commemorating Africa Day, Minister in the Presidency, Mondli Gungubele, has emphasised the importance of protecting children against malnutrition.

He made these comments on Wednesday at the commemoration of Africa Day, which is being commemorated under the theme, ‘Strengthening Resilience in Nutrition and Food Security on the African Continent’.

According to the Government Communication and Information System (GCIS), the challenge of malnutrition is very concerning, as it has significant consequences for the African child, and it further leads to decreased social and economic development of nations.

The COVID-19 pandemic has further exposed the economic vulnerability of countries, including their health and food systems.

“Children are the future leaders of tomorrow, and therefore each person has a responsibility to fight malnutrition in Africa. What we do now to protect and defend African children will contribute immensely to the outcomes of their future.

“This year, we must strive harder to meet the general objective of securing greater political commitment and investment in nutrition to address ongoing nutrition challenges in children,” Gungubele said.

Africa Day is commemorated annually, following the founding of the Organisation of African Unity (OAU), which was created on 25 May 1963.

“This day also provides an opportunity to celebrate the socio-economic achievements of Africa. As part of the long-term vision set out in Agenda 2063, we must strive to fully realise the common aspiration of well-nourished citizens, with a particular emphasis on women and children.

“Government acknowledges that even though there is still more that needs to be done, the African Union has made important progress in these two decades and has established itself as the premier organ of unity on our continent.

“It has devoted focused attention to enhancing its ability to address the complex challenges of African unity and development. It is in this vein that we all have a role to play to address key challenges on our continent.

“South Africa congratulates and stands with our African counterparts for rising up to address pertinent challenges in order to create better life for all people living in Africa,” Gungubele said.